On Saturday, April 30, the public will have a chance to support a very unique fundraiser as the movie Black Hawk

Down will be shown at the Bernard Simpkins Fine Arts Center at the Eastern Florida State College Cocoa Campus.

What makes this event unique is the fact that retired Col. Danny McKnight and members of Task Force RANGER will appear during intermission to answer questions pertaining to the film. No one knows exactly what happened more than Col. McKnight and his men, because they were there!

So much has been said and written about Black Hawk Down over the years, and this is a great opportunity for the public to meet and speak with those that were there that fateful day in 1993 in Mogadishu, Somalia.

Col. McKnight, a resident of Brevard County, presented the idea for this fundraiser to me because I have been involved with St. Baldrick’s Foundation. Without the support of Col. McKnight and his wife, Linda, this fundraiser would not be taking place and they are to be commended for stepping up and making this happen. 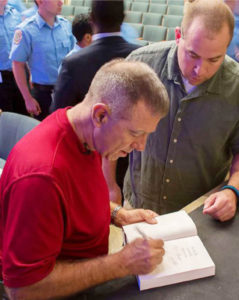 “It is a special pleasure and privilege to share Black Hawk Down with others,” said Col. McKnight. “However, the greatest part of that, in this case, is being able to support St. Baldricks.”

Doors for general admission tickets will open at 6:30 p.m. At 7 p.m., there will be a brief introduction of dignitaries, and then the movie will get underway.

Approximately halfway through the movie there will be an intermission, during which Col. McKnight and the members of Task Force RANGER will take questions from the audience. The movie will then resume to its conclusion.

All proceeds benefit the St. Baldrick’s Foundation, the largest private (non-government) funder of pediatric cancer research grants, whose mission is to find cures for childhood cancers and to give survivors long and healthy lives.

Your email address will not be published. Required fields are marked *